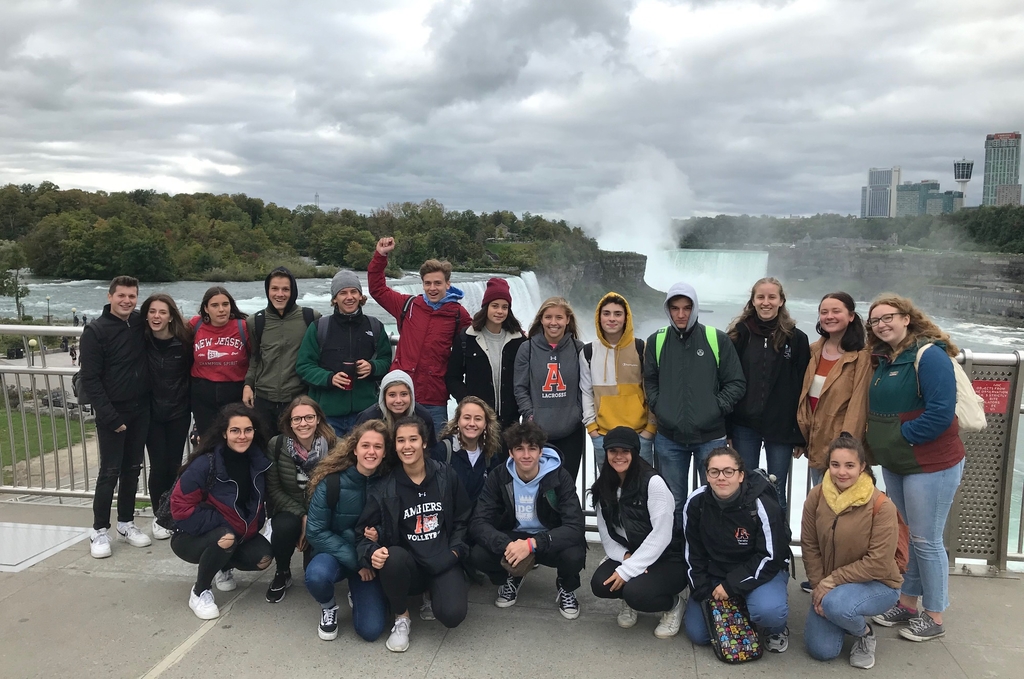 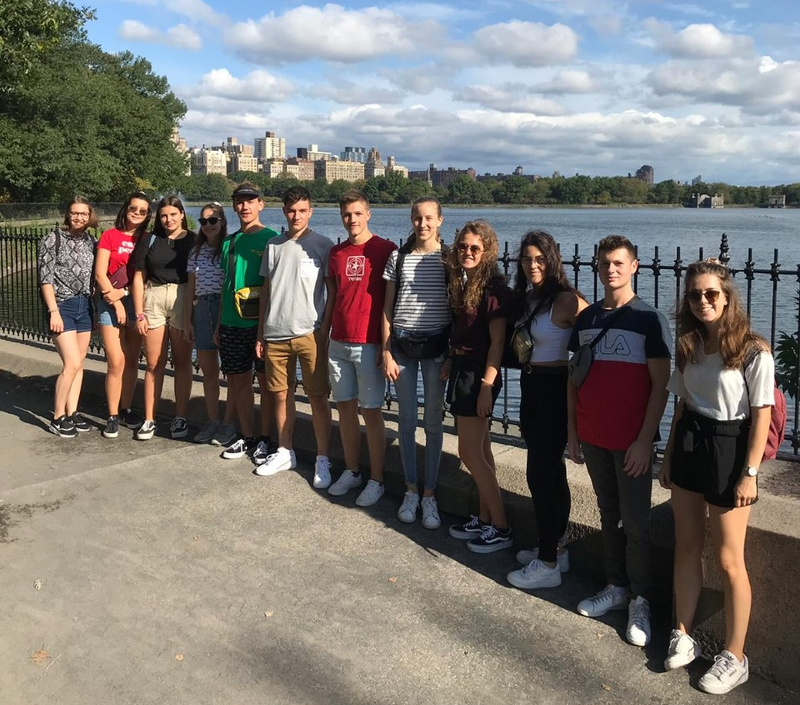 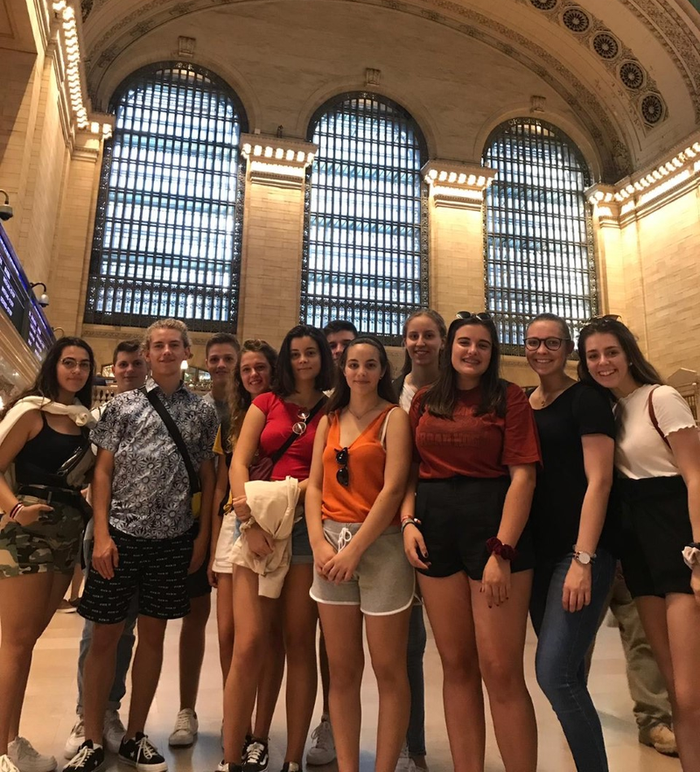 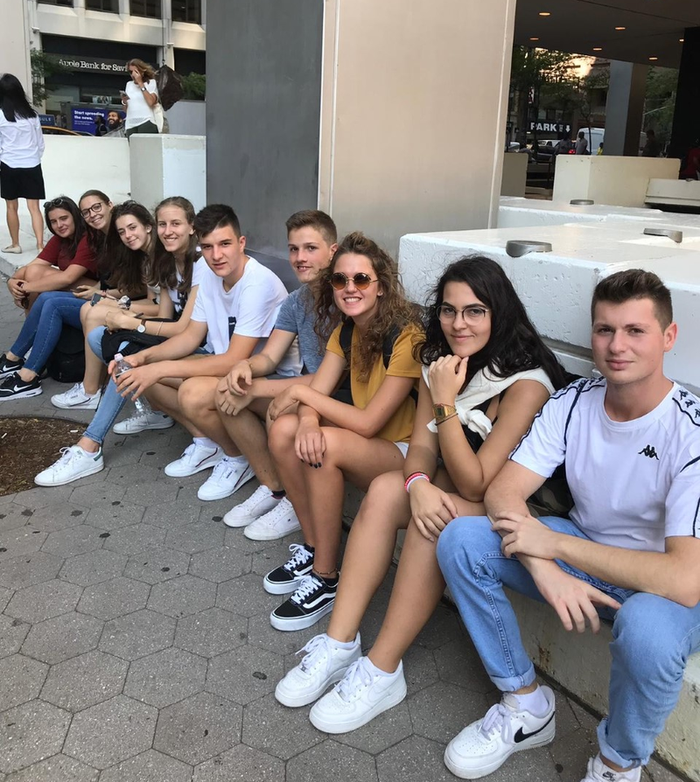 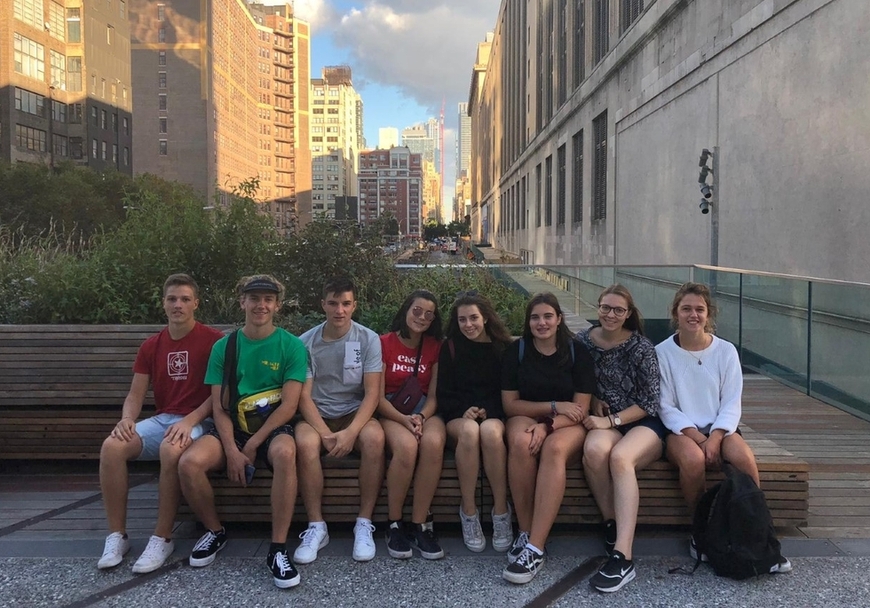 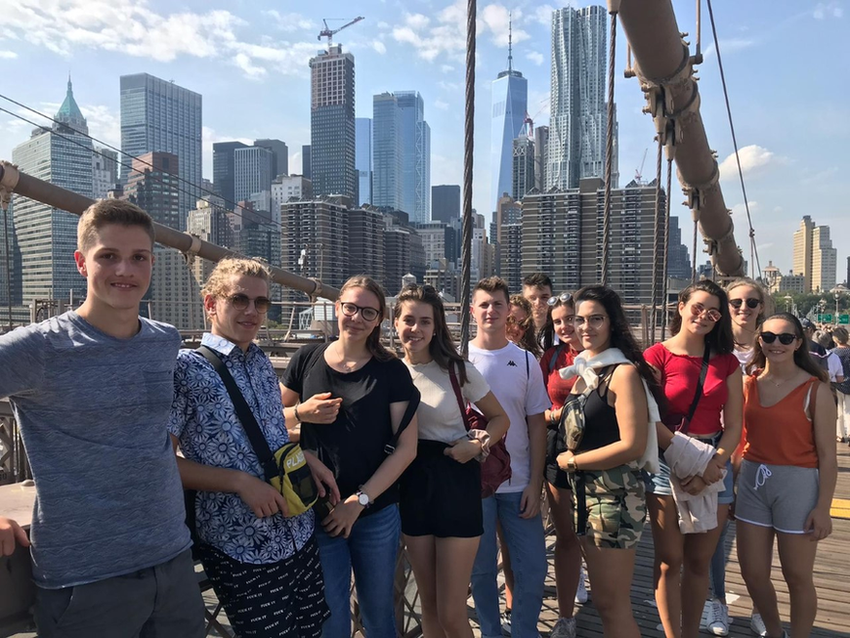 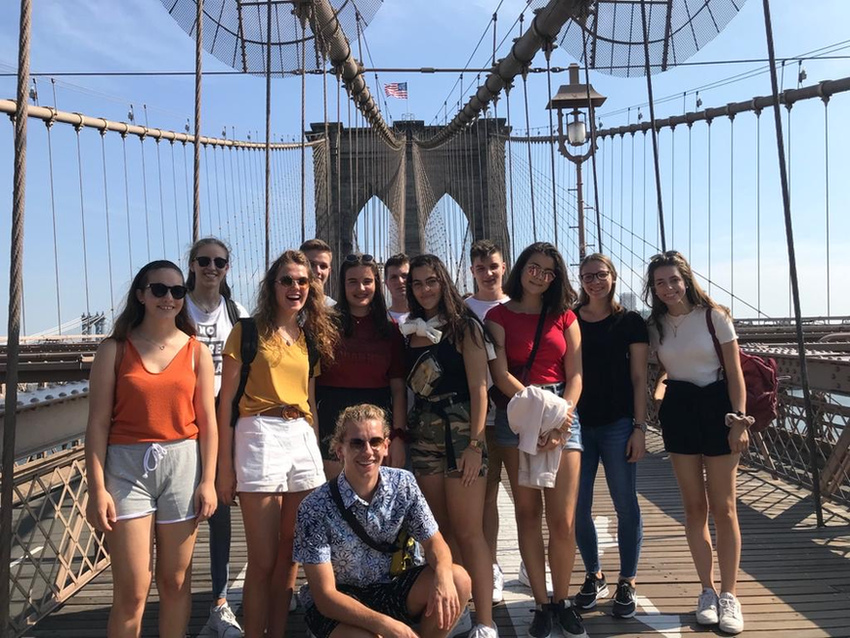 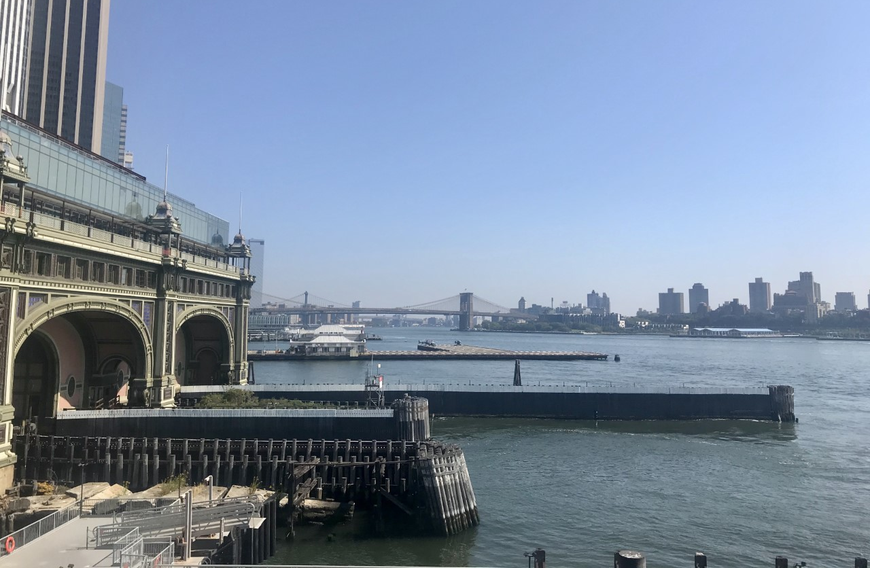 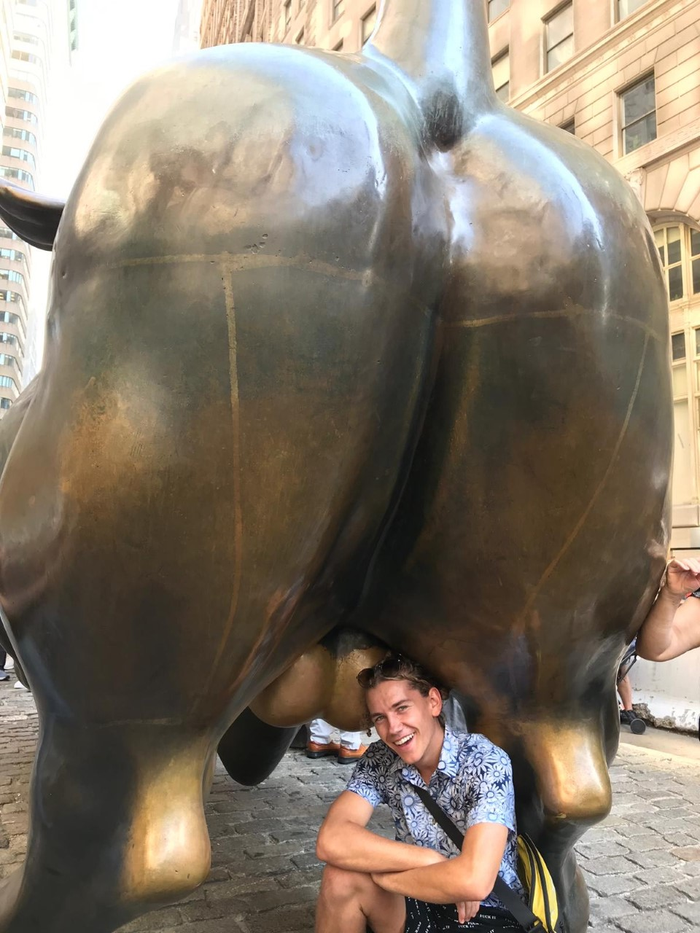 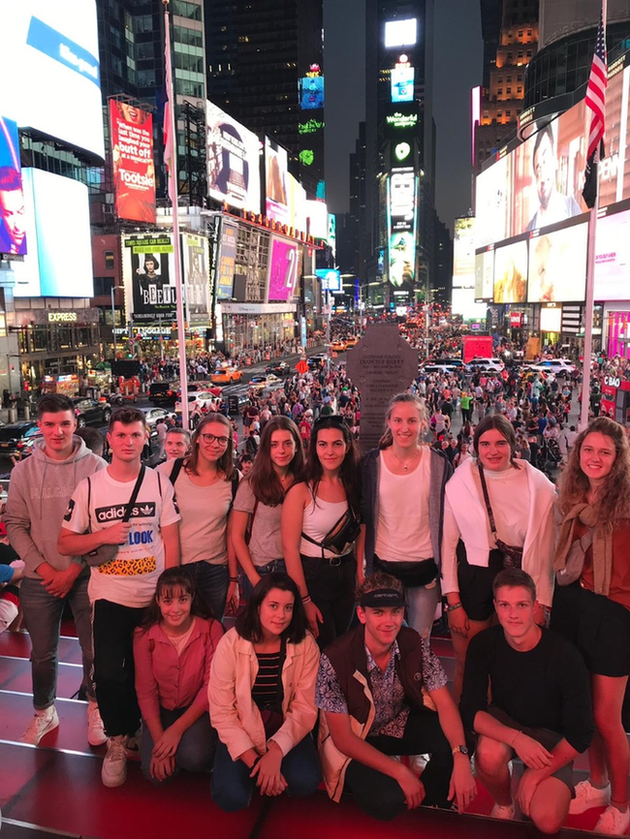 Arrived in New York City, we quickly went to our visit hostel in Manhattan and then went to Timesquare, where we made an interesting sightseeing tour with a “hop on and hop off bus”. We were able to see some of New York's most famous streets and places like Broadway, the Empire State Building, Columbus Circle, Soho and Little Italy. It was very impressive.

The following day, after eating delicious pancakes and croissants for breakfast, we took the subway to the World Trade Center (Ground Zero). We also went to the Wall Street, the financial area of New York City. Afterwards we took the ferry to Staten Island, were we could admire the Statue of Liberty. In the afternoon, we visited the Brooklyn Bridge, but just for a few minutes, because it had almost 40 degreese celcius. To conclude this impressive day, we went to China Town and the Grand Central Terminal, one of the busiest subway and train hubs in the world, where multiple subway lines serve the station.

The third day we took a walk through the Central Park to the Guggenheim Museum. There we saw some important pieces of art. Afterwards we walked along the Fifth Avenue, with some of the most expensive shops like Tiffany & Co and some of the architectural highlights like the Rockefeller Center, Trump Tower and the St. Patrick's Cathedral.

So far, it has been an amazing trip and we look forward to another day in New York and exciting weeks in Amherst and Washington D.C. 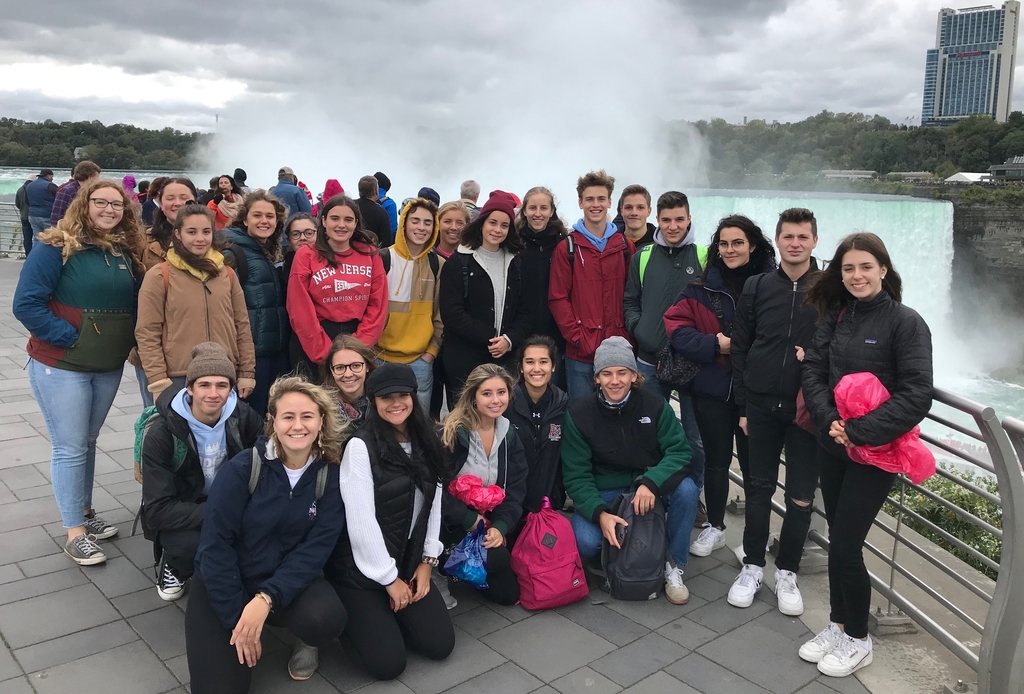 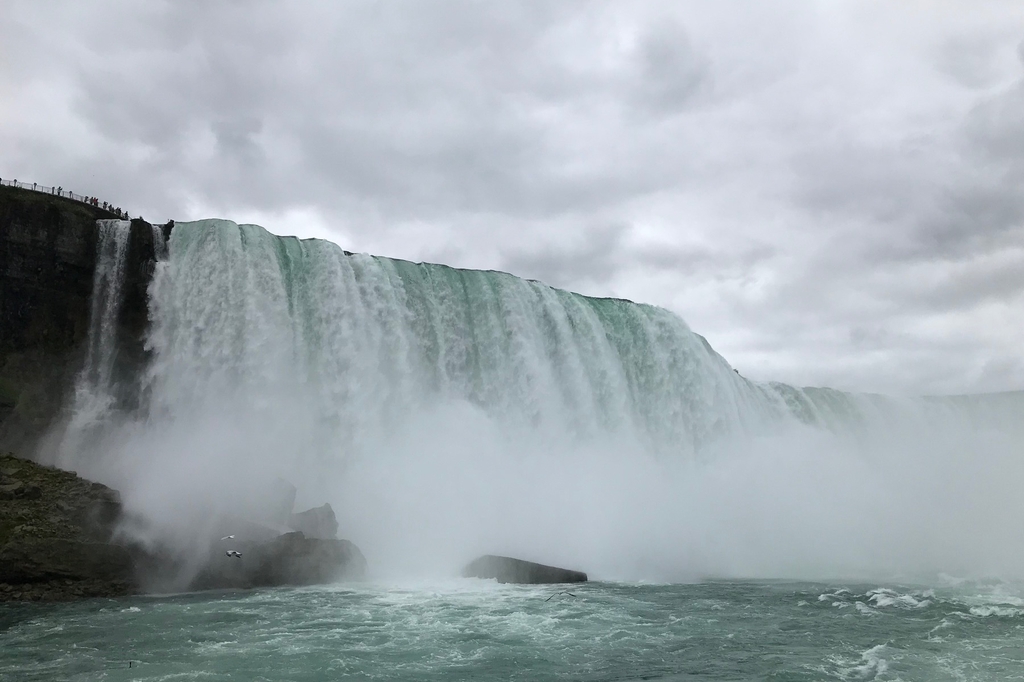 What do you do when you have got a Wonder of the World right in your own backyard? Well our Amherst friends took us there, Niagara Falls in 20 minutes from downtown Buffalo.We took a Maid of the Mist boat ride getting very close to the falls and hearing the crashing waves with breathtaking views. Of course we got wet but it is part of the experience. Super close to the falls- unforgettable experience! 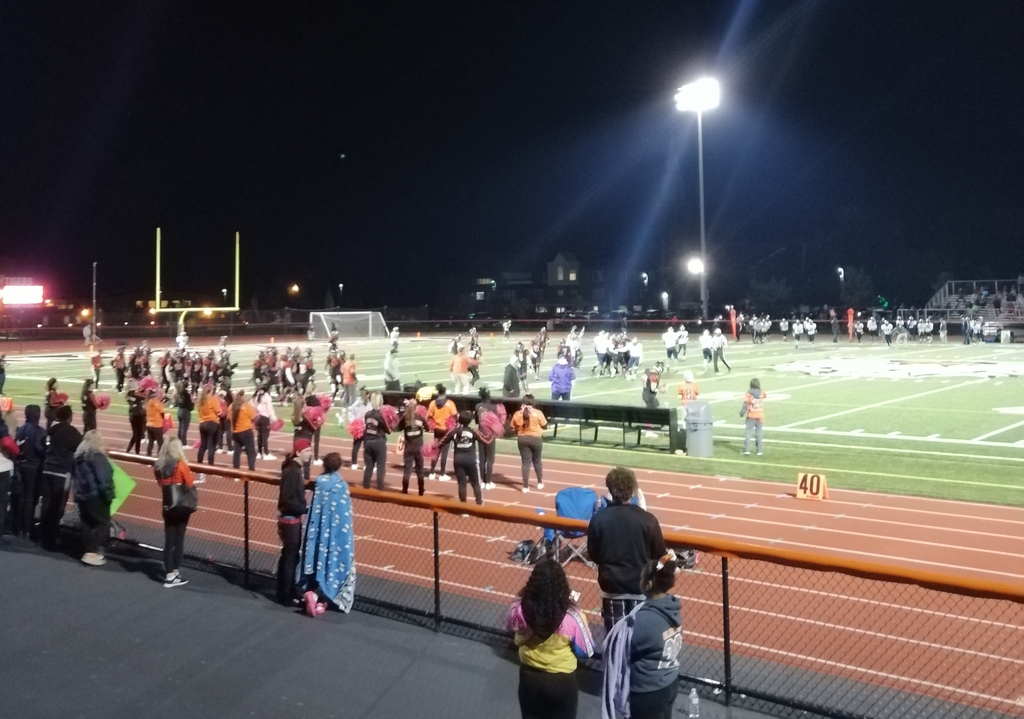 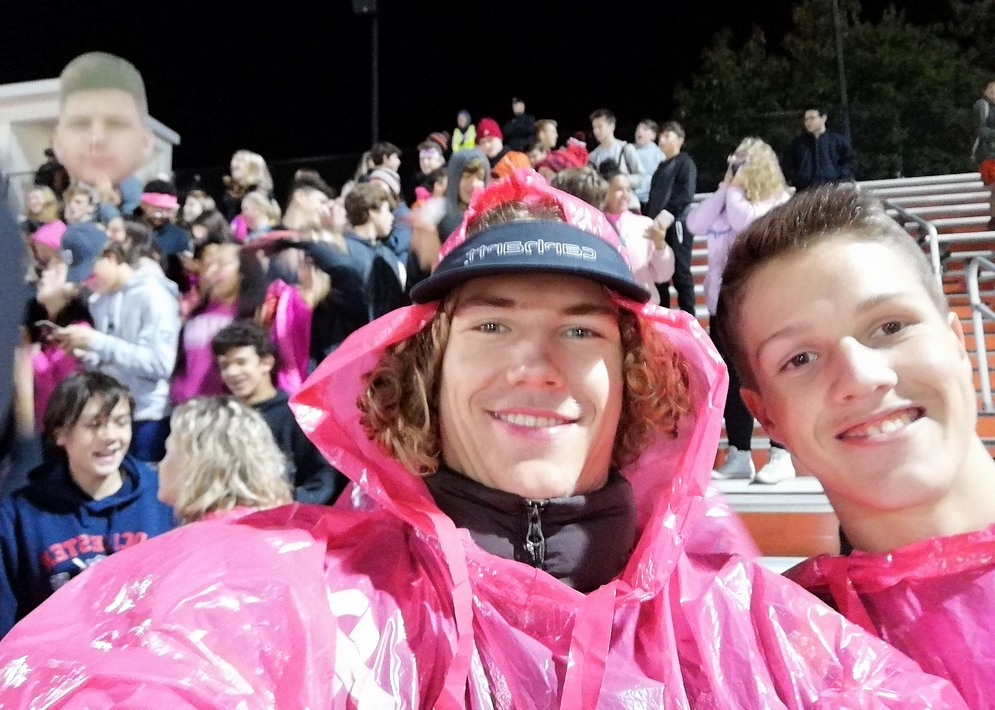 On Wednesday we moved around the school to do our presentations in several classes. In our free periods we took classes together with our hostsisters and - brothers. In the afternoon nearly everyone stayed at their homes to take a nap after a such long and exhausting day. After dinner we went to an Arcade, called Lazertron, near our Neighborhood, to play a game of Lazertag. After a lot of fun and sweaty clothes, we finally got something to drink at Sonic, a "Restaurant" where the waiters served us with rollerblades.

On Thursday we spent most of the time in the multi-purpose room with Mrs. Gonzalez, where we played scrabble, kahoot and other quiz games with the american students. After school we split up and everyone made something on their own. In the evening we all met at Sophie's house and watched a film.

On Friday we made a trip to the world famous niagara falls, which are situated in the Niagara Falls State Park. After a half hour drive with the bus we finally arrived at our destination, right after that we got a ticket from Mr. Tanner for our boat-tour trough the Niagara River. Nearly everyone enjoyed the boat tour, except for the ones who got wet, but it was worth it. Afterwards we walked to an obeservation deck where we took a beautiful group picture. After a quick lunch, we went back to Amherst Highschool, but instead of going home we went to Duff's to eat the famous Buffalo Chickenwings. In the evening we watched the last Football match, which the Tigers fortunately won, we had a lot of fun! 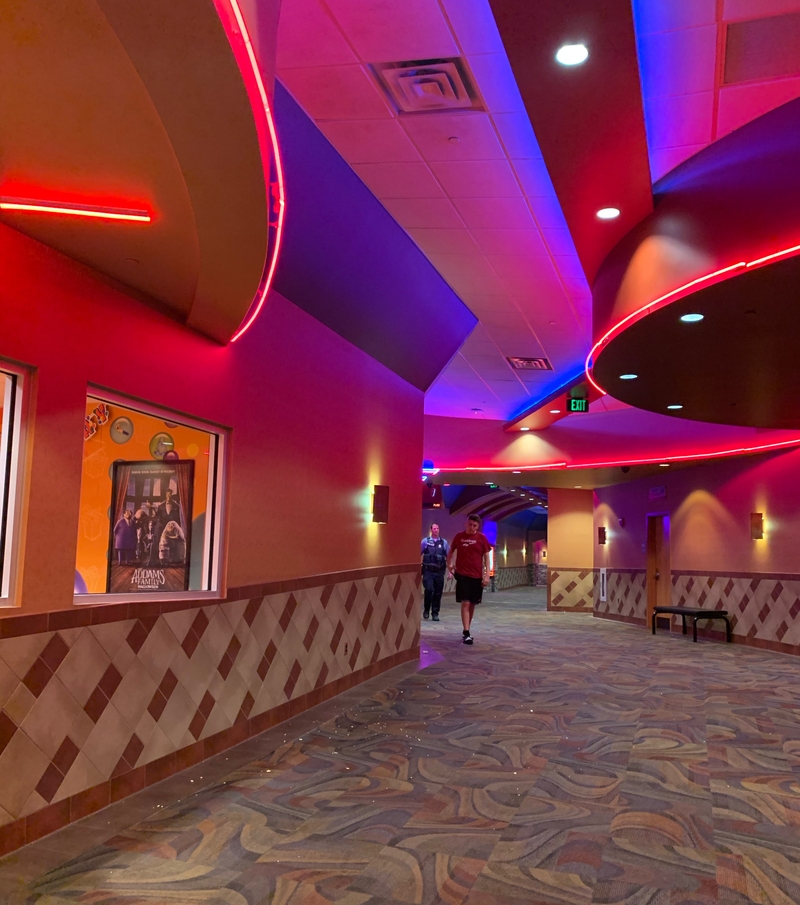 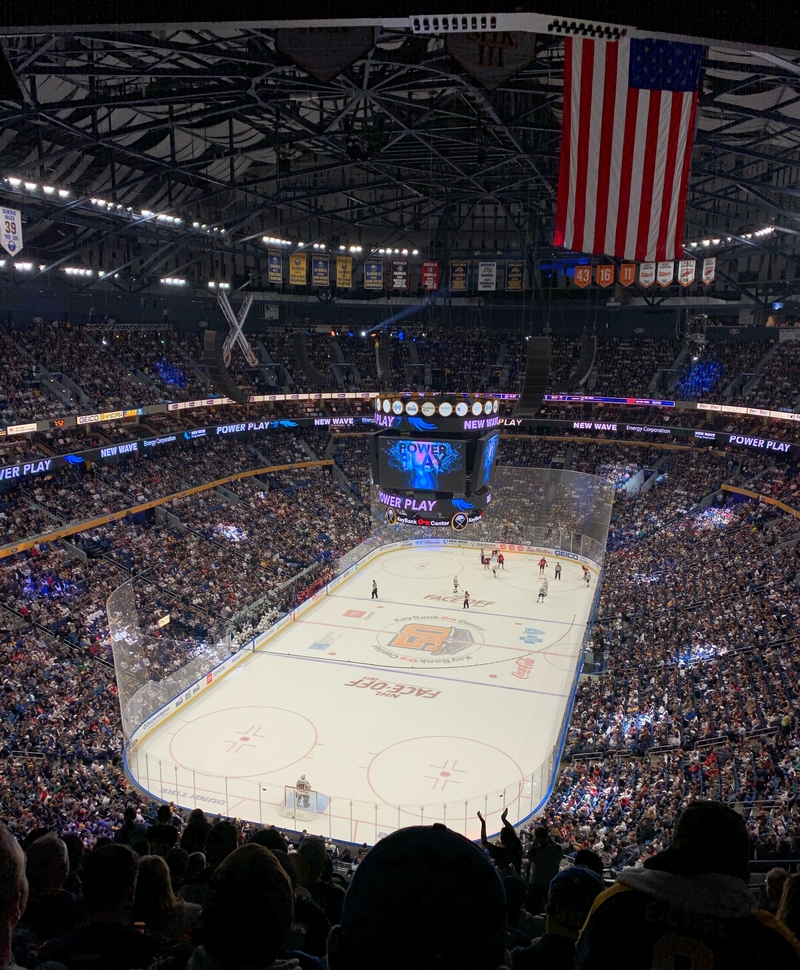 We spent the past week at school and when the weekend came we could finally spent our free time with the other exchange students. On saturday, the 5th of october, we went to the downtown to see the farmer market and to eat some specialities for breakfast in a near bar. Later we went to different shops, the most of them were vintage shops. In the evening we took the subway and went to a famous hockey game. It was such a great experience and we had a lot of fun. After the game we went at Maddy’s home for dinner.

The next day everyone had breakfast at home. In the afternoon we ate pizza and spaghetti. After the lunch we went to a park with a waterfall and we hung out there for some hours. At night some of us went at Marissa’s home to eat ice cream and others went to the cinema to see the movie “Joker”.

On monday we went to school and after the second period we could make a short Field trip to the Darwin Martin house. It’s the first house that was built with a modern design and the first one with electricity in Buffalo. Everything in the house was built in relation to nature. We spent there two hours and went back to school. At night we had dinner all together at Mia’s house. 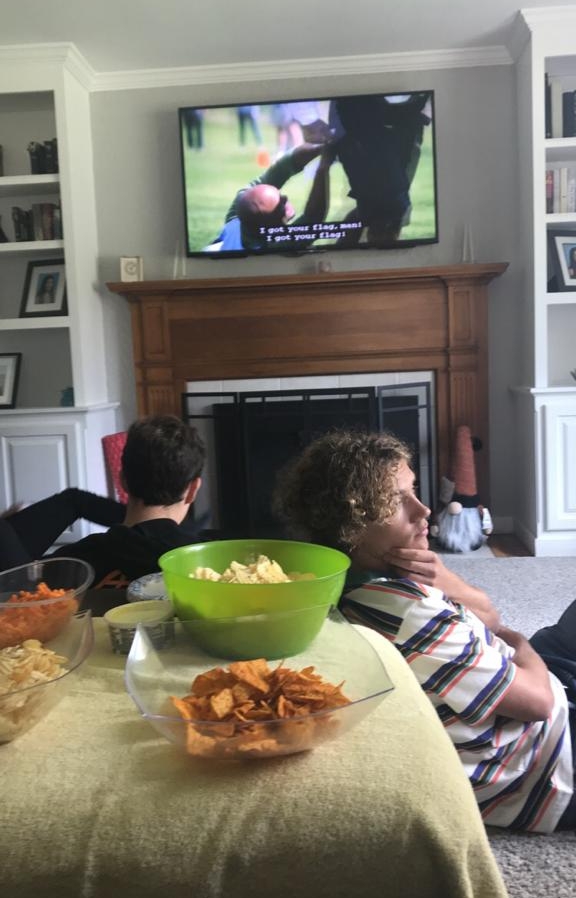 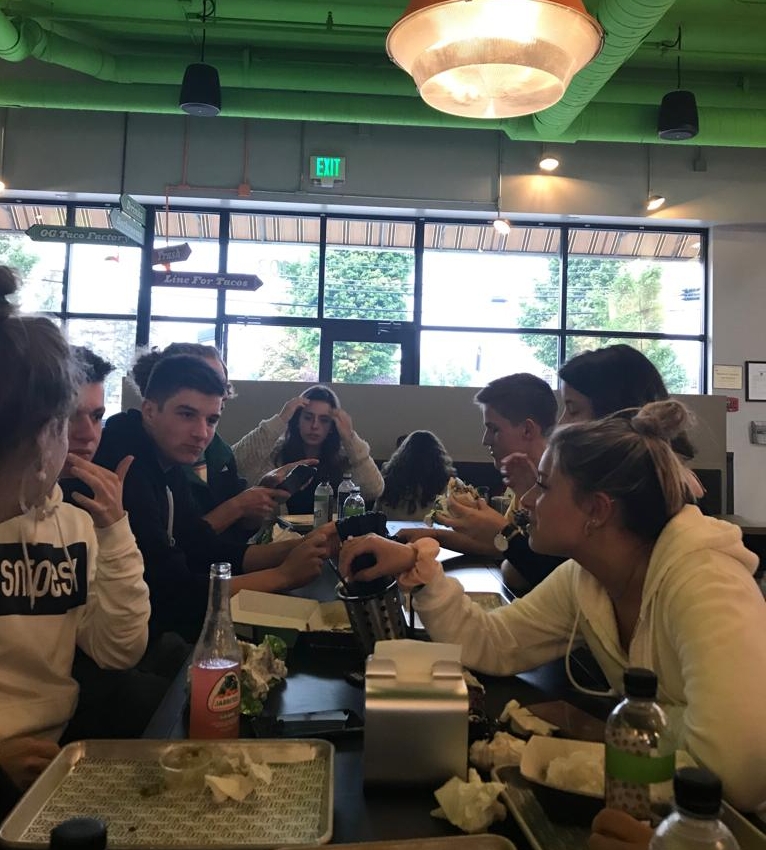 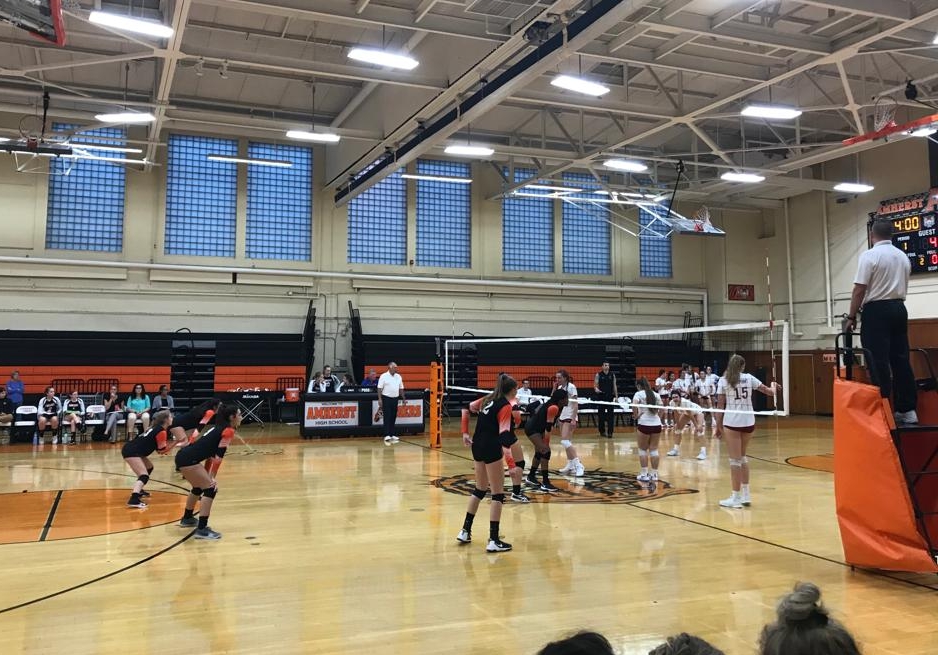 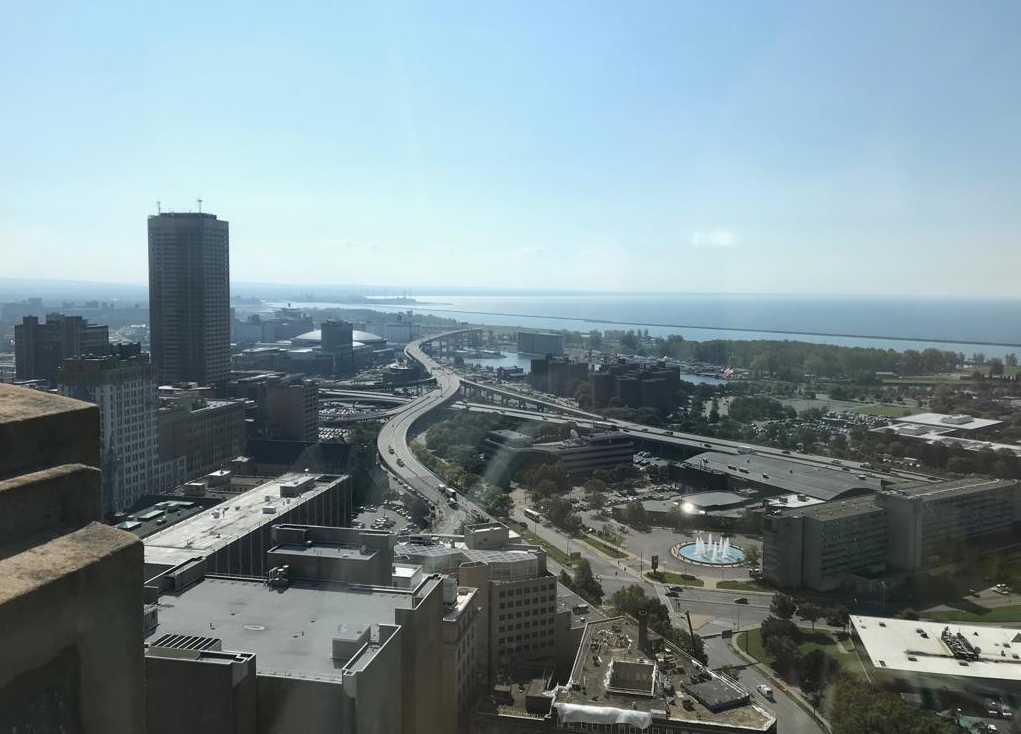 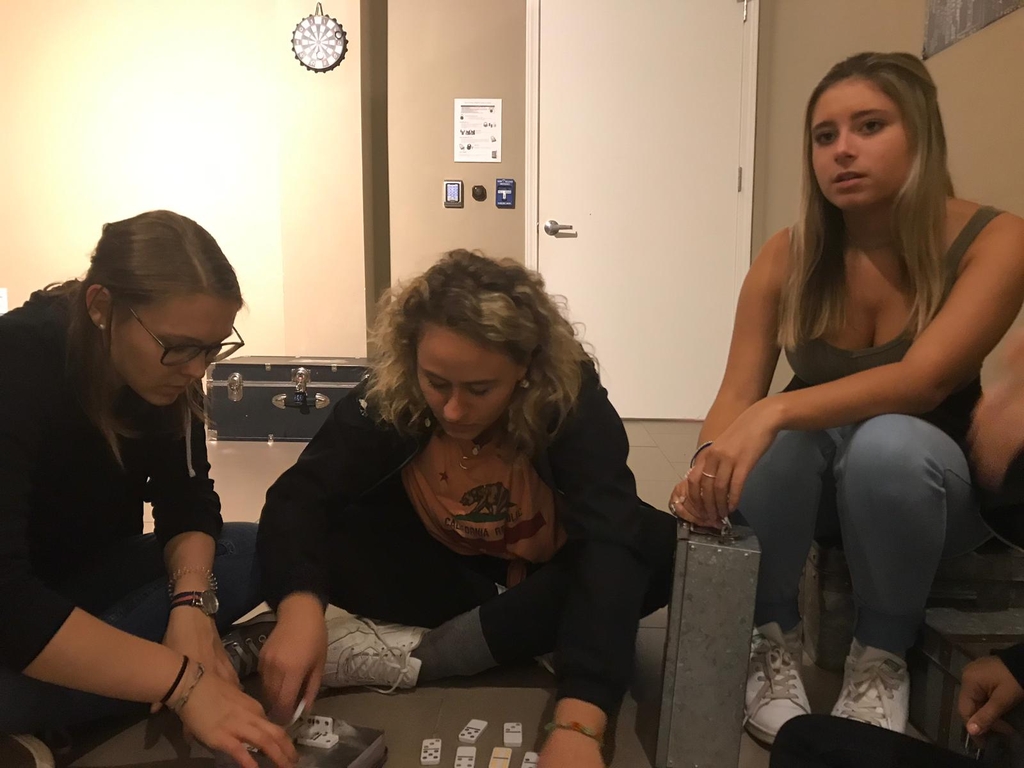 After a funny saturday evening on sunday all of us went to one of our exchange students‘ house. There we had lunch togheter and watched a very important footballgame, which the Buffalo Bills unfortunately lose. In the evening the most of us had dinner with their hostfamilies.

The next day we took classes togheter with our hostsisters and -brothers. After school finished we spent the afternoon laughing and getting to know each other better. Later on we drove around Amherst for getting some burittos to eat. In the evening we went to watch a volleyball game of one of our exchange student.

On tuesday we went on a fieldtrip without our american friends to Downtown Buffalo using the subway. First we visited the Buffalo City Court, which is the second largest one of New York. They showed us the cells where people wait to see the judge and we got introduced into the federal court system. Afterwards the group went to the family court, where we attended some trials. It was really interesting and impressive. Later on we went for a walk around Buffalo and took pictures from above. In the evening we went to an escape room and drunk some bubble teas.

We really enjoy our stay in Amherst so far and are looking forward to spend another funny and interesting week with our exchange students! 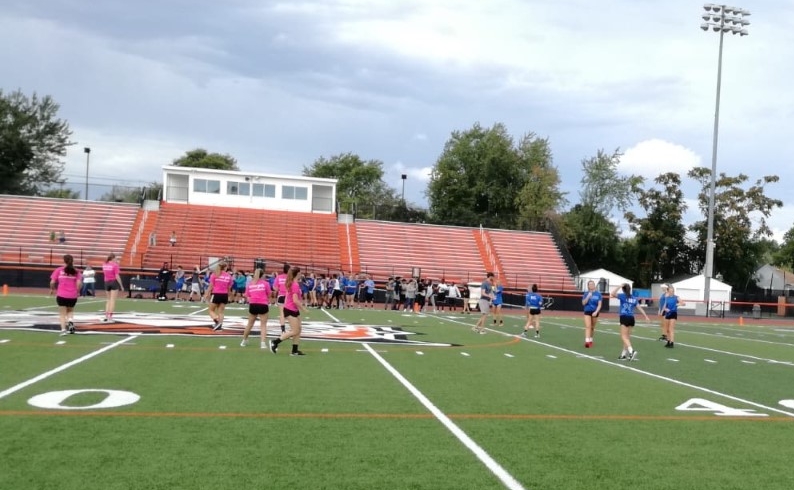 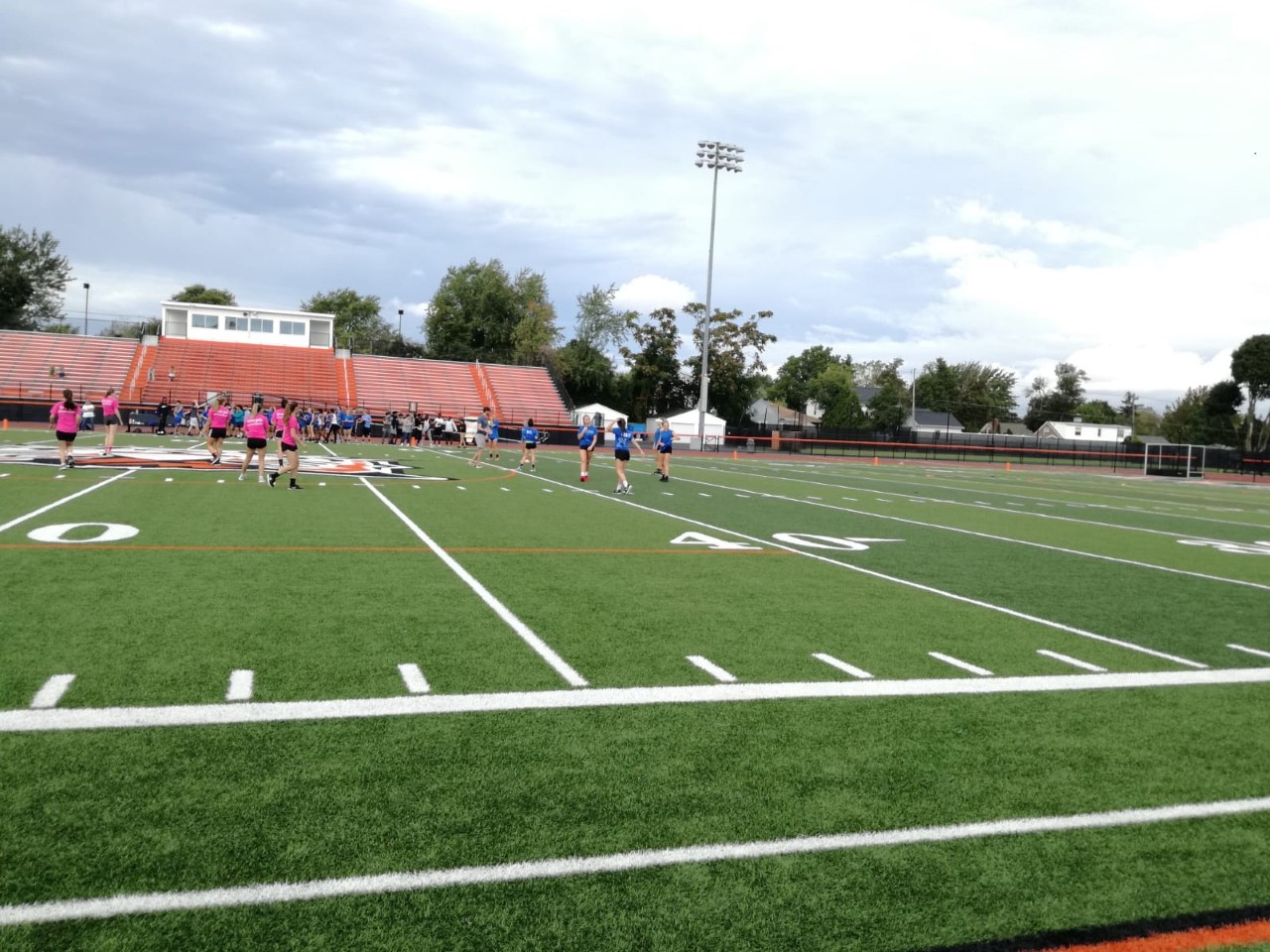 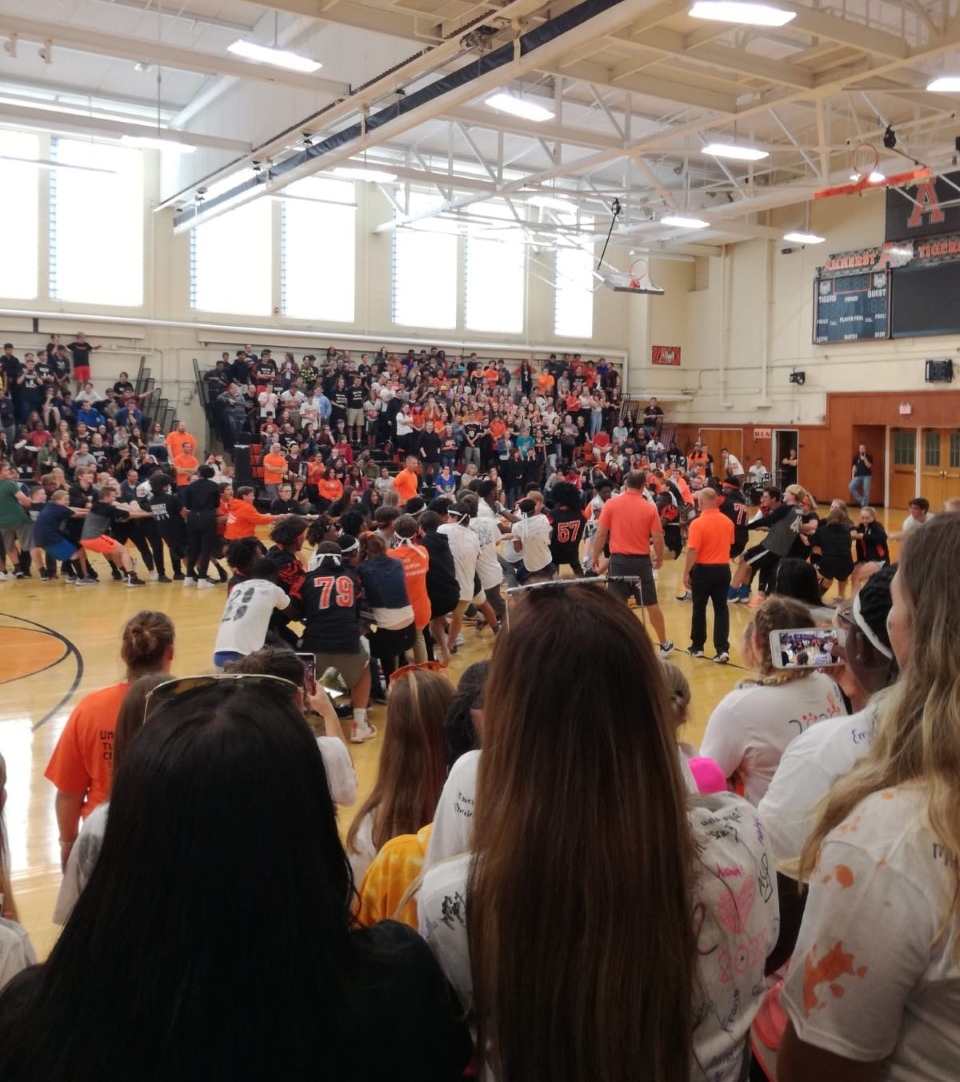 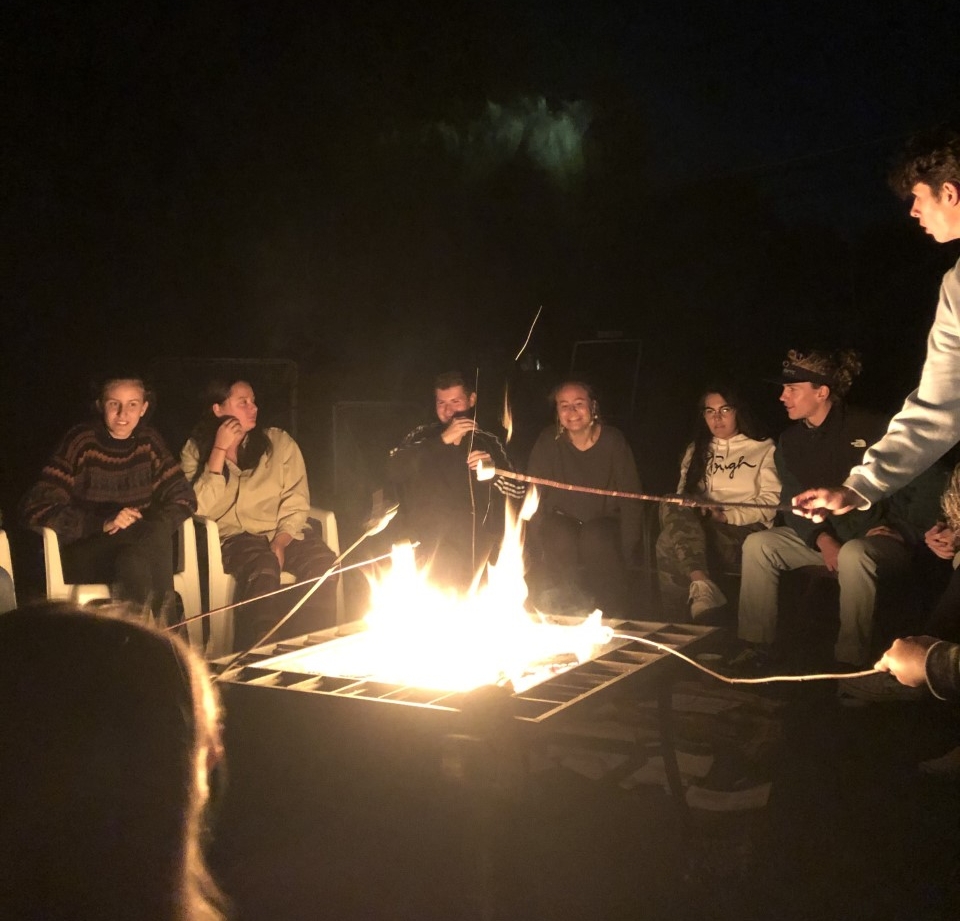 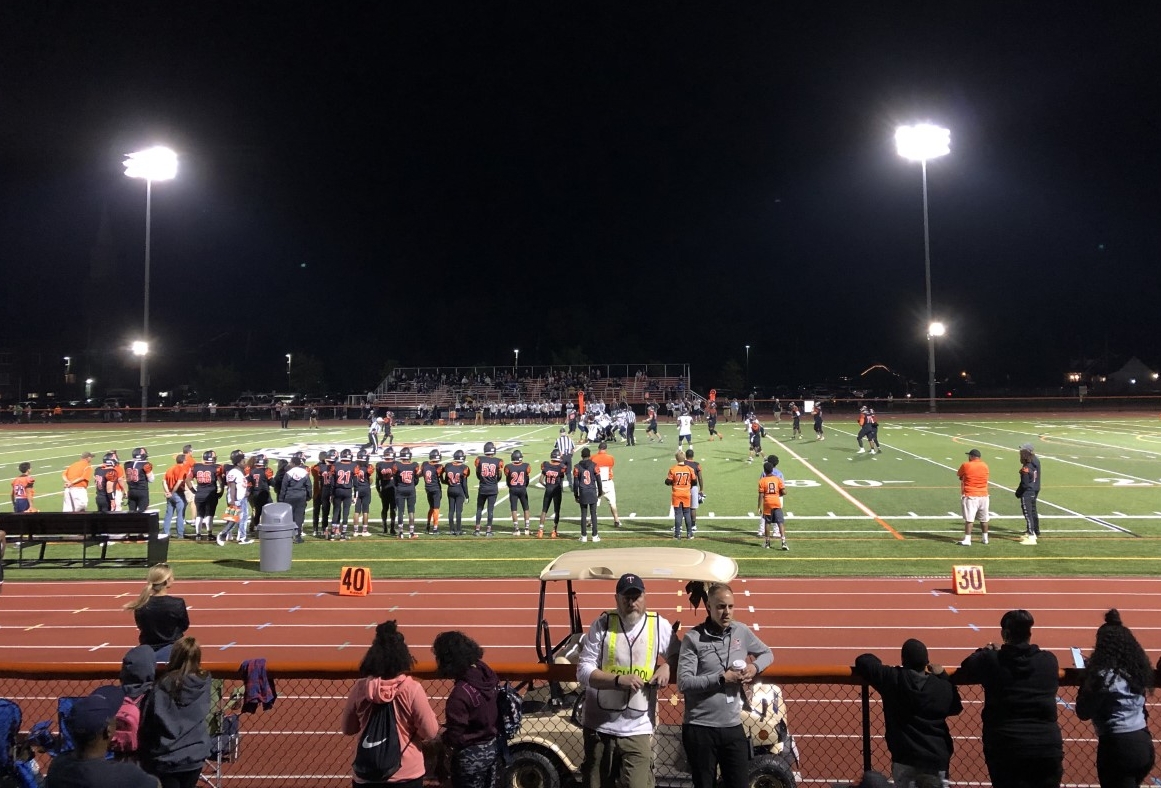 On Thursday the 26th we arrived in Buffalo and were greeted by or host students. They drove us to Amherst and showed us the area a little bit. Later on there was a welcoming dinner where we talked to the students and their parents and got to know eachother.

Friday was our first day at the Amherst highschool. It was very confusing because we had to walk form class to class in this huge school, but thankfully we were always with our host students who showed us arround. We got to know out host stundents friends. After school there was the Pep Rally in which every sports team performs a dance and the homecoming king and queen are announced. In the evening we went to a football match of the Amherst tigers which they won.

The next day we went to the Poder Puff game which is a girls football match coached by boys. After the match we went all together to the mall and went shopping and ate something. Later at night we went to the homecoming school dance, were everbody danced in the gym.

The next day we went to the Poder puff game which is a girls football match coached by boys. After the match we went all together to the mall and went shopping and ate something. Later at night we went to the homecoming school dance, were everbody danced in the gym.

Tuesday, October 8th was the last day with our host families in Buffalo. We had a farewell breakfast all together and went to class with our hosts. Until meeting at the airport at 5:30pm we could all spend our final time the way we wanted. After a sad goodbye we arrived safely in Washington DC.

On Wednesday we started early in the morning to visit some of the important sights of Washington. First we had a guided tour through the Capitol. The Capitol is the building where the Senat and the House of Representatives are (Congress). We saw monuments such as the Washington Memorial and the Abraham Lincoln Memorial and we walked past the back of the White House.

On Thursday, our last full day of our trip, we went to the National Museum of Natural History. The Museum wasn't only about the history of different species but also about diseases, stones and animals. We all really enjoyed our trip and our last days in the capital but we're also happy to come back home.